Why do public sector digital transformation programmes fail, and how can government build the skills, culture and processes to improve outcomes? Our GM for Government David Wilde examines this ongoing challenge.

In its newly published report - The challenges in implementing digital change - the National Audit Office explores the common causes of failure in public sector transformation programmes - and lack of digital knowledge among senior leaders is again singled out as a primary reason.

This shortage of tech know-how among senior Civil Servants is nothing new - there are similar reports dating back almost two decades in which those same challenges were identified. So why, despite numerous historical interventions like the Gershon Review into public sector efficiency, does it seem like little has changed?

The findings of the NAO report are almost a mirror image of those earlier reviews. 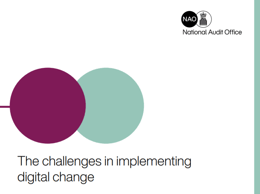 Similar issues are flagged around programme governance, understanding of technology, supplier management, and the lack of technically capable people to advise senior leadership.

Whitehall has been insulated from the brutality of the market, so in the public sector, both central and local government organisations have been able to continue as they are, because the consequences aren't the same for failed digital programmes. In that protected environment, it’s absolutely incumbent on the government to do something about it, because market forces won’t force them to.

Whitehall has been insulated from the brutality of the market

Yet again, the NAO has flagged a lack of executive sponsorship of major change programmes as an ongoing issue. The government’s challenge is to get senior leaders to stay in roles for an extended period, because so many transformation success stories derive from continuity of leadership and a continuous focus on successful delivery.

WATCH: David Wilde on the causes of government transformation failures

(Check out the full episode HERE) If we look at the details of the many historical investigations into digital capability, the challenges and recommended actions for the government make familiar reading, despite being 20 years apart. So what’s stopping government from making meaningful changes?

Can we really train our way through these issues? Earlier this year, the Government Digital Service (GDS) launched a new training course to boost the digital knowledge of senior Civil Servants in non-technical roles, so clearly, this need has been well identified.

Yes, you can put people on courses, but what you also must do is bring experts into the room of senior decision-makers, and upskill those technical experts to operate at that strategic level. Consider the position we're in today - there are still virtually no digital leaders at government ‘board level’. Where there are, they’re the exception rather than the rule.

The public sector needs to unlock the massive, in-depth knowledge and expertise that we possess to deeply inform and shape the future of the organisation, which is what digital disruption is really about. Amazon’s success wasn't driven by a CTO two organisational levels down the company - Amazon was driven by somebody who 'got digital' and owned the company.

The new NAO report recommends government departments work better with HM Treasury to review existing funding and approval processes, and “carry out more robust evaluation and project assurance at the start of digital programmes to better understand their complexity and scope.”

So why do these fundamentals of governance need to be highlighted again? It’s a sad reflection of the ebb and flow of government fashion. This is exactly what Gershon put in his review, and also similar to the SPRITE programme (Successful Projects in an IT Environment) that were established by the McCartney review in 2000.

In the digital arena, as the public sector continues its journey to the cloud, the interoperability between systems, data-sharing and layering insights between different agencies and departments will be critical.

☁️ Read: Why Cloud is the future of public sector collaboration

So when the NAO report refers to the need to “produce departmental strategies and plans to manage legacy IT systems”, the danger is that those develop in isolation without a cross-government strategy setting the overall direction. The concern is we still haven't left the ivory towers of Whitehall, which deliver maybe a fifth of public sector services, with the other four-fifths being delivered by health, local government and the voluntary sector.

The question we should perhaps be asking of government is: to what extent is it about digital strategies, or to what extent should it be about government strategy, in line with its overarching strategic objectives like economic prosperity, protecting the vulnerable, and tackling climate change?

David Wilde, is the General Manager at Government Transformation magazine, and was previously Executive Director and CIO of Essex County Council, Westminster City Council and the London Borough of Waltham Forest. Before all of the above, David held policy roles in Cabinet Office and was CIO of the Deputy PM's Office. He has also been a Non Executive Director of Mid-Essex Healthcare Trust, and a Director of two large Multi-Academy Trusts.