Cabinet Secretary Simon Case has pledged to overhaul the Civil Service and acknowledged it had often assumed a “defensive crouch” position when faced with previous attempts at reform. 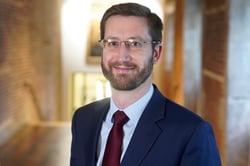 Case is the most senior Civil Service adviser to the Prime Minister and has been in the role since September last year.

Speaking at the University of Newcastle in what was his first public speech since taking up the role, and referring to the Declaration on Government Reform, Case warned that he and his senior colleagues needed to avoid the "Curse of the Missed Opportunity".

Citing Whitehall historian Peter Hennessy, Case said that ‘The Missed Opportunity’ is the quintessential government mistake – the mistake Government makes when it fails to hold on to the lessons learned.

We must make sure that in the next five years we learn the lessons of the pandemic and we seize the opportunities to bank our wins and fix our weaknesses."

Acknowledging the strengths of the Civil Service, Case said that the successes had been pulled off by diverse teams, working together with common purpose.

He listed the rapid development and roll-out of vaccines, the furlough scheme which has supported 11 million livelihoods, the swift expansion of Universal Credit, and the ‘Everyone In’ campaign that saw homeless people given shelter.

These achievements, and the part we played in them, reveal the best that the Civil Service can be. Skilled, innovative, ambitious. More confident, more spirited. Less risk averse - less hostage to process."

Alongside this, he cited specific weaknesses ("none of which will come as a surprise to those who know the Civil Service") which included cumbersome processes and siloed working, that slowed down delivery, hindered best practice and blurred lines of responsibility.

We failed to work consistently well across national and local government, and missed the value of expertise on the ground. We had weaknesses in how we gathered, handled and presented data, and also in our longstanding lack of specialist scientific and technical knowledge."

Fixing these weaknesses would be necessary if the Government was to deliver on its levelling-up agenda, and was the impetus for the Declaration on Government reform in June, which reflected the views of civil servants and ministers - and took in the critiques of external commentators.

Case's assessment of the current state of the Civil Service made particular reference to the growing role of data ("We won’t improve decision-making if we don’t improve our data collection and analysis"), citing the steep learning curve of the pandemic where officials had been emailing Excel spreadsheets back and forth at the beginning.

Initially the Civil Service didn’t know where cases were or how they were spreading. But within months, there were automated feeds and digital dashboards showing aggregated tallies of new cases, hospitalisations and mortality rates from the NHS and Public Health England. Civil service coders and analysts were able to look at anonymised data sources to create a more accurate picture of what was happening in the country, in terms of health, the economy and public services.

More sophisticated use of data gave ministers confidence to take the difficult decisions needed to tackle the virus. And this should be the norm: innovative use of data in policy-making."

Case cited the examples of new entities such as 10DS (a data science team in Downing Street), the National Situation Centre, and the Delivery Unit as bringing better evidence into policy and delivery discussions at the heart of government to bring about "system change".

The challenge is that all too often the Civil Service doesn’t have the data where it's needed, when it's needed, or even the knowledge how to interpret and display the data it has. External expertise and specialist knowledge would be needed to identify opportunities, shape policy and refine its delivery.

We need to have better analytical skills. How we interpret, use, display and communicate data are essential parts of the mission.

The really big data guns sit in departments – not in the Centre. Departments are the real catalysts of change through their use of data in designing and delivering better public services."

Case concluded by saying that while the changes required across Whitehall may be substantial, they would make it more likely that in a whole range of future scenarios better decisions would be made, and that this would have a direct, swift and positive impact on people’s lives and the country as a result. Maintaining the confidence and trust of citizens made this an essential focus.

Through the pandemic we have had to adapt - there has been no choice but to change. That impetus for change has not receded."