The Year Ahead in Government Technology: Reflections, Opportunities 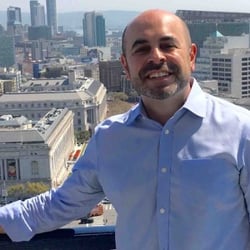 When I was New York State’s CIO, day-to-day pressures to solve specific problems were always a major part of the work (especially during 2020) and some days it was easy to lose sight of the bigger picture.

I don’t think my perspective has changed too much during my past year working at Microsoft as Worldwide Public Sector Director of Critical Infrastructure, but having more time to reflect on the big problems and challenges has helped focus my attention on some things.

The operational challenges that are facing lots of public sector organisations across the world won’t be solved with a technology 'easy button'. It is not the reality of the situation, and it also puts an undue burden on public sector IT organisations.

Anyone who has worked in government technology knows that the way to solve problems is a combination of business experts, front-line employees, and tech staff working together. When those elements are in alignment, you can begin to solve big, complex problems. When they are not, that’s when things fall apart.

As I reflect on my upcoming one-year anniversary in Microsoft Worldwide Public Sector, my understanding of those business challenges and how to integrate truly cutting-edge technologies with the operational realities of government technology is leading me to an optimistic view of what can be done.

Lately I’ve been thinking a lot about problems that cross agency and operational lines. Let me give you three examples: Accessibility, Sustainability, and Security. All three are challenges facing down all kinds of public sector organisations, for example departments of transportation, departments of urban planning, all IT organisations, not just one type of agency. That’s a challenge, but also an opportunity – if we can make inroads on implementing solutions in one place, I believe they can be replicated over many other agencies.

Accessibility has been top of mind for me lately. Our leadership at Microsoft has also made this a clear priority. Earlier this year, Microsoft President Brad Smith made it clear: Microsoft is doubling down on accessibility.

I also recently presented on a panel (in-person) at the Smart Cities Expo World Congress in Barcelona on the topics of 'Inclusion, Rights, and Ethics at the Core of the Digital Transition'. I argued, like many others have, that accessibility has to become part of everything we do, rather than an afterthought.

That means doing more than an accessibility check at the end of product development or retrofitting 'old stuff' because we have to, but actually taking the time to build with access in mind from the start. We’re in this moment of once-in-a-generation investment in infrastructure, and anything less than full commitment to accessibility means we miss a chance to make real change for the people who depend on public infrastructure the most.

The COP26 summit this past Autumn brought sustainability back to the forefront as governments around the globe brokered agreements on climate change. When it comes to sustainable technologies, we often think of it through a private sector lens and usually that means the discussion starts and ends with emissions reduction. Don’t get me wrong, that is very important, but it’s not the entire story when we talk about the public sector.

Unlike most private sector organisations, public sector organisations also need to plan for and respond to environmental crises and provide a framework for evidence-based regulation and decision-making. All three of those things can be aided by technologies, and some of which we don’t usually put under the heading of 'sustainability'.

The challenges are real and tangible: a recent study found that 25% of all critical infrastructure in the United States is at risk of flooding, so it’s an urgent situation.

Lastly – security. Like accessibility this needs to be woven into everything. In the case of critical infrastructure, the stakes are very high. We’ve seen examples over the last year that highlight the severity of the problem. Many people remember the Colonial Pipeline incident from earlier this year that caused significant disruption on the east coast of the US, but just recently a cyber attack on a small utilities company caused them to lose 25 years of data, which has potential to cause significant operational damage.

Zero Trust is the path forward here, but that’s an approach, not a technology. In my role, I’m putting a lot of thought into how I can help public sector organisations bridge that operational and technical divide.

I expect the three trends in 2022 I just mentioned to stay near the top of the list in the coming year, but I’m also looking to the future of how governments work.

Some of the most effective and unsung work I saw in the public sector came from small, dedicated teams, especially digital teams, that had opportunities to work creativity and collaboratively in ways that are not always typical in public service. Given the complexity of the problems facing governments and the speed required to address them, I’d like to see similar models adopted more widely.

The timing is right. With digital collaboration tools more readily available after nearly two years of the pandemic response, many public sector organisations are better equipped than ever to embrace models that allow this type of work.

It may seem like a bit of a leap, but I think it goes right alongside organisations embracing hybrid work models. As I wrote earlier this year, hybrid work is also a path to operational resiliency.

While governments did an admirable job switching to remote work on short notice in 2020, most have still not fully grappled with a plan for long-term hybrid work, including the organisational and policy changes that would accompany it. In 2022, I hope and expect to see more governments facing this head on by building on the technologies they’ve embraced in the last two years with policy and process changes to support them.

Jeremy M. Goldberg is the Worldwide Public Sector Director of Critical Infrastructure at Microsoft. Prior to Microsoft, Jeremy served as the Interim-CIO at the State of New York and also the Deputy Secretary for Technology and Innovation where he led the state’s IT organisation through the first wave of the Covid-19 pandemic. Prior to New York State, Jeremy served in technology leadership roles in the Mayor’s Office’s in New York City, San Francisco and San Jose California. He has been featured in the Wall Street Journal’s CIO journal, published columns on the topics of Digital Transformation, Strategic Investments in Technology in NextGov, Government Technology and State Scoop and is the recipient of several public sector fellowships and is currently a Senior Innovation Fellow in the Harvard Kennedy School’s Ash Center. In 2020 he was recognised as #2 in City and State New York’s Government Technology 50. He is a graduate of the University of Texas-Austin, and received his Masters from the University of San Francisco.