With digital, data and technology driving so many aspects of government transformation, progressive public sector agencies are turning their relationships with commercial suppliers into more collaborative partnerships. The first issue that the public sector needs to understand and accept is that private sector organisations are in it to make a profit. In conversations with private sector organisations, establish common ground about what you think is acceptable profit and what they think is acceptable profit. From that initial position, you can establish a healthy relationship.

Private sector organisations, unlike the public sector, have to pay corporation tax, they've got overheads like anybody else, and they have shareholders, so they've got to keep people happy. If people are investing, that’s good for many public sector pension funds, so there is almost a virtuous circle around profit.

The second issue to establish is a set of shared values. This is why Corporate Social Responsibility is now becoming an integral part of core public sector contracting.

Doing business with private sector organisations, you don't necessarily have to share the same values, but you need to at least agree that you can get behind them and recognise what they bring to the work you’re doing together.

For example, many private sector organisations across the UK that have worked with local authorities to create jobs. That's one of the simplest one of the best examples for CSR in action. Firms like Capita (for all that they've had tough times in recent years) and BT both have a great track record of establishing apprenticeship schemes and jobs by locating offices in the places where they've won contracts. Private sector partners can create employment and economic growth all over the UK. 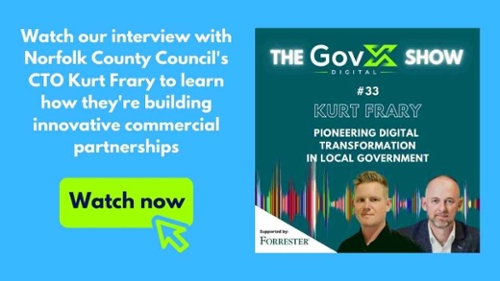 Government shouldn’t enter commercial partnerships for short-term gain - the aspiration should be to build a long-term relationship. But it’s important to note that shouldn’t necessarily translate into long-term contracts - they're not the same thing.

You could enter into a five-year contract, but that supplier must know that you'll be open to a bigger, broader relationship, and the reason for that is the size of the prize. If you're doing a town centre or city centre redesign, that's a 20-year project. That doesn't mean that you have to award 20 year contracts, but again, going back to our first two principles, if you have an agreed set of values between, with clear understanding around profitability and potentially gain-share, you can sustain that relationship over time. But they need to know they have to re-compete to sustain the business. That's healthy, and it's mature, because it regularly resets the relationship and challenges complacency.

Flexibility to respond to accelerating change

Healthy relationships between government and suppliers can create social and economic value. In contrast, you don't want to be myopic about contracts, it's not all about driving down to the lowest price and locking yourself into long-term deals to avoid risk.

One of my regrets on some of the longer term contracts that I did many years ago was entering 10-year deals for infrastructure projects which made sense given the technology landscape at the time - and were really good deals for probably six of the 10 years - but became less good value in the last four years purely because the pace of change for that technology arena stepped up four or five gears. A new vendor might create something radical, but because you're locked into a 10-year arrangement, you don't get to benefit from it for a few years.

This is particularly relevant for technology where there are greater implications for long-term contracts, given the constant acceleration of development. A long-term contract on large-scale housing developments can still be 10 years or 15 years, because you're not going to build 4,000 houses in five years. It’s about contracts being relative to the pace of the project.

Many contracts are now structured as a three-plus-two-plus-two model - essentially seven-year contracts with three years plus two extensions. That kind of flexibility shouldn't be something that the private sector is frightened of. It promotes a healthy scenario that gives suppliers the opportunity to sustain the relationship while the deal continues to be competitive, continues to be attractive and continues to deliver value.