How the HMRC app is simplifying tax services

Engaging with the taxman is hardly anyone's favourite task. This, however, might be changing thanks to a revamped HMRC app that allows users in the UK to check their income and how much tax they need to pay.

Since its relaunch in 2016, the app has been downloaded by 3 million people and over half a million users access it every month. A new feature now allows users to pay their self assessment taxes, using open banking technology.

Femke Hawkesworth, Product Manager for the HMRC app, spoke to Government Transformation about the reasons for the app's success.

When HMRC introduced its first app in 2013, it was primarily designed to be a tax calculator. Three years later, it was relaunched as an alternative to online services for users to manage their tax affairs. Since then, the HMRC app has gone a long way through multiple iterations and improvements, including the introduction of the ‘Help to Save’ account (an account for people on tax credits or Universal Credit) and a feature that allows users to make self assessment payments. 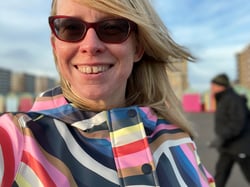 “We started discovery work for payments in the summer of 2021,” Hawkesworth says. “Development began in September, with the bulk of the work concluding in December and January.”

The app is particularly useful for people on lower incomes, especially if they work in multiple jobs or variable hours, as it allows them to know how much they will get paid a few days before payday, through real-time reporting.

“We make this information available through the app, and it enables people to manage their money better,” adds Hawkesworth.

One of the key advantages of the app is that it allows users to log in using a PIN or the smartphone’s biometric identification, once the account has been initially verified through the Government Gateway portal.

If it needs a manual, it’s not well designed.

The new feature supporting payments directly from the app is part of HMRC’s strategy to meet user needs by providing the best channel for users, says Hawkesworth. Inspired by commercial banking apps (according to the latest figures, 76% of people in the UK use online banking), the ‘Pay by Bank’ option lets users settle any dues with HMRC from their banking apps with all the details pre-populated.

“This massively reduces the risk of making a mistake when paying your tax bill and means the users can trust that the money is going to the right place,” explains Hawkesworth.

Behind the popularity of this government app is its simplicity and accessibility. As Hawkesworth stresses, the app must work for everyone without the need for instructions: “Best practice in digital design suggests that for a service like ours with such a large and diverse population, if it needs a manual, it’s not well designed,” she says.

The interaction of users with the HMRC app is changing the way people feel about HMRC, continues Hawkesworth. In the past, citizens would only contact HMRC when they had to and this relationship usually had negative connotations as it was often attached to the notion of owing money to the taxman. This dynamic is now shifting thanks to the simplicity of the app and the trust that users are placing in it.

“Our users put the HMRC app on their most personal devices,”  Hawkesworth says. “They use it frequently to keep in control of their finances and often talk about it with great affection. The app is something personal to them and they trust it, I think that’s something with immense importance.”

Putting users at the heart of the design

The app is overwhelmingly popular among users. It has a 4.7 out of 5 star rating in the Google Play Store based on 31,000 reviews - two decimals higher than the average rating of all the apps available for download in the Google Play Store, as of January 2022. Contributing to this success is its user-centricity, where users have a core role in the design and development of the app.

“Users are at the heart of everything we do,” says Hawkesworth.

To make sure it's fully accessible to all users with diverse needs, the HMRC app team regularly carries out user research on any aspects of the app that they want to build or change.

“Making sure our app works for everyone has been paramount from day one,” Hawkesworth continues. From an accessibility angle, mobile apps can contribute to increased use of public services. They tend to have more focused less cluttered interfaces and provide better support for a device’s assistive technology than a web browser.

“Mobile app accessibility is not as mature as it is on websites. There’s little guidance and few, if any, apps out there built to the same standards ours - just look at how many apps on your phone support portrait and landscape mode! People will often ask our developers how accessibility works on apps, but for us it’s a whole team effort.”

As an example, Hawkesworth says her team designs at a regular text size and to the largest that a smartphone would support. Testing on devices using assistive technology is embedded in quality assurance processes and the team works closely with HMRC’s Digital Inclusion, Assurance and Standards colleagues, as well as independent stakeholders, to ensure that the app meets the digital accessibility regulations that all public sector bodies must meet by law.

The team relies heavily on data and research methods to drive their decision-making, including user research interviews, data analytics, running in-app surveys, and A/B testing to find out if changing the words on a button makes it clearer what it does.

“Users will surprise you,” says Hawkesworth. “They’ll tell you your service does things you never knew it did. They’ll think that something works completely differently from how you built it. They’ll tell you what they need - don’t just think you know best.”

This direct conversation with users, as well as not assuming you're an authority on a subject, is Hawkesworth’s main advice to public sector colleagues working on digital transformation projects.

She also suggests speaking to similar teams across government to learn from their experience and giving teams problems to solve rather than features to build.

"We're all keen to collaborate and help each other out," Hawkesworth concludes. "We have also created an app design system and toolkits we use to build our iOS and Android apps. They're open source and can be used by anyone - so that might be a starting point."