Reykjavik City and the Icelandic government ran two large-scale trials of a reduced working week of 35-36 hours with no reduction in pay between 2014-2021. 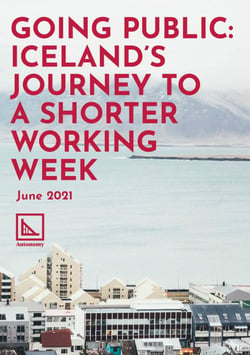 Analysis from the Association for Democracy and Sustainability (Alda) shows that productivity and service provision remained the same or improved across the majority of trial workplaces, and worker well-being dramatically increased across a range of indicators, from perceived stress and burnout, to health and work-life balance.

Government-managed contact centres saw an increased proportion of calls answered - achieving higher productivity (93% versus 85%) against a 'control' contact centre workplace not included in the reduced working hours trial. The performance of local government contact centres was similarly not degraded by the shorter working hours.

The trials also remained revenue neutral for both the city council and the government, providing a crucial, and so far largely overlooked blueprint of how future trials might be organised in other countries around the world.

The trials involved 2500 workers – over 1% of Iceland’s entire working population – and have been a springboard for rolling-out the right to shorten working hours for 86% of the country’s workforce.