The Government will this week step up a recruitment drive for roles at the new economic campus in Darlington – as part of its 'levelling up' agenda.

A number of new Treasury roles based at the new campus will go live as part of a drive to diversify the way the Government makes policy, broaden access to skills and talent and widen opportunities.

Last month the Department for Levelling Up, Housing and Communities opened a second HQ in Wolverhampton as part of the drive to spread the work of Whitehall across the country.

"Through moving roles out of London we are bringing the Civil Service closer to the communities it serves — meaning people across all corners of the country will be at the forefront of decision-making," said Steve Barclay, Chancellor of the Duchy of Lancaster and Cabinet Office Minister.

As part of the recruitment drive, a Career Fair will be held at Darlington College tomorrow, with senior civil servants from the Treasury, Department for Business, Energy and Industrial Strategy and Department for International Trade providing a flavour of what it is like to work in government.

A Government advertising campaign will also begin targeting Wales, Yorkshire and The Humber as well as the North East, with adverts online, in local newspapers as well as outdoors, in places such as gyms, bus shelters and shopping centres.

The ‘Closer to Home campaign’ promotes Civil Service roles moving out of London and closer to communities that will put local people at the heart of Government decision-making, with vacancies available in numerous departments alongside the Treasury including Cabinet Office, Department for International Trade and others. 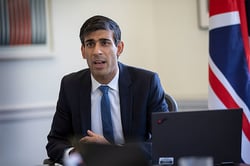 "We are giving talented people in the North East the opportunity to work in the heart of government, making decisions on the most important issues for our country," said Chancellor of the Exchequer Rishi Sunak.

The Chancellor spent the day working at the Darlington Economic Campus last Friday where he had lunch with some of the Darlington-based staff and unveiled the new Campus branding.

Announced at the March Budget, between 200-300 Treasury roles will be based at the campus. These will be filled by a mixture of people recruited directly to the campus and some existing staff who relocate.