How the Open Innovation Team is changing Civil Service recruitment

The Open Innovation Team (OIT), a Department for Education unit supporting policymakers in central government and the wider public sector, is seeking to shake up how it recruits civil servants to make the process more inclusive.

A blog post mentions some of the changes OIT is making, including offering pre-application online information sessions and one-to-ones with the hiring manager where candidates can ask questions about the job and the team. The OIT has also reviewed the way it will score applications and increased the outreach of its vacancy adverts.

Government Transformation spoke with two academics involved in the OIT review and with recruitment experts to find out more about the effectiveness of the new measures.

According to the latest data, the demographics of the civil service in its totality are broadly in line with the UK's working population. However, that is still not the case among senior roles, where working class, ethnic minority and disabled people are still markedly underrepresented.

Past approaches to improve Civil Service recruitment have included the introduction of unconscious bias training, making the selection process name-blind, and the use of diverse panels. But Corine Sheratte, senior diversity, inclusion, culture and ethics (DICE) consultant at management recruitment firm Green Park, argues that these kind of positive action initiatives are arguably ineffective.

“For a number of years now, we have observed a predominant focus by organisations on unconscious bias training as proof of their progressive EDI [equality, diversity and inclusion] credentials,” Sheratte says. “However, simply reminding people of their potential for prejudice is not enough to change the manifestation of deeply embedded thinking and behaviours.”

Sheratte notes that blind recruitment can also be costly since it requires manual de-identification of materials or the development of a customised software platform to assess applications. Instead, she suggests that employers focus on more sustainable ways of mitigating bias, including organisational cultural change and cultural intelligence training.

Whereas interview panels are encouraged and are an example of good practice, Sheratte warns about the risk of becoming a tick-boxing exercise that can be perceived by job candidates as potential tokenism.

“In our experience, we have observed perceptions of tokenism when setting up diverse panels, with some instances where diverse members are placed in interview panels and yet are given limited to no influencing power over final hiring decisions,” she says. “If diverse panel initiatives are perceived as tokenistic, this is likely to impact experienced inclusion and ultimately retention levels of diverse talent.”

Sheratte also flags the overemphasis placed on driving the business case for diversity in inclusion in the 2017 civil service diversity and inclusion strategy. Although a powerful tactic, she thinks that the ethical and moral case should be communicated more clearly.

“This framing shift from protecting communities to increasing profitability has consequences,” Sheratte tells Government Transformation. “It can create a mistrust from both majority and minority groups, who often perceive that employers are virtue signalling or carrying performative allyship behaviours which conveys an element of inauthenticity, which mitigates the impact of inclusion efforts for diverse talent.”

How OIT reviewed its recruitment process to make it more inclusive

OIT recently partnered with two academics from the University of Essex to explore ways in which to make the recruitment process of its permanent staff more inclusive and attractive to candidates with different backgrounds. 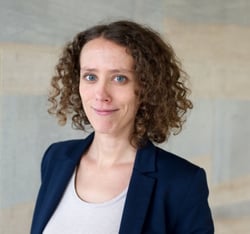 Dr Marie Juanchich, a behavioural scientist whose research focuses on reducing discrimination and increasing diversity, explains that the first step was to carry out an audit focused on three stages of the recruitment process: who applies, who gets shortlisted, and who gets the job.

“We started with an informal audit of what's happening there: How diverse is the team? How diverse are the applicants’ backgrounds? Is there diversity in the people who are being shortlisted?” says Juanchich.

However, collecting and accessing some of the candidates’ profiles data, such as socioeconomic or family background, was challenging and often missing, adds Juanchich. “Some of these questions about background are sensitive and some add an extra burden on the candidates who maybe won't get the job,” she notes. “So it's tricky to achieve a good balance of asking questions and getting information but also being fair to people.”

Juanchich’s colleague Daniel Jolles, a behavioural scientist and PhD student that also participated in the review of the recruitment processes, adds that the OIT identified over-reliance on universities to recruit new talent as one of the issues restricting  its ability to attract candidates from diverse backgrounds. Although permanent jobs with the OIT do not require university degrees, the team has employed several PhD students in the past.

“Universities are feeding out civil servants so if you don’t have diversity in those institutions, then that’s a real challenge,” Jolles says.

A report by the Social Mobility Commission (SMC) published in 2021 showed that civil servants from lower socioeconomic backgrounds are “significantly underrepresented” in the Civil Service. Working class civil servants make only 18% of senior roles and 43% of the most junior grades.

In contrast, 3 out of 4 senior civil servants come from privileged backgrounds and 1 in 4 of those in the most senior positions attended independent school, which led the SMC to conclude that the composition of the most senior ranks in Civil Service "is roughly unchanged since 1967", when this kind of data was last collected.

Other measures taken by OIT to increase the outreach of its vacancies has been to offer one-on-one chats with the hiring manager before applying and the promotion of the job adverts within departmental networks such as the Department for Education Equality Networks, the Civil Service Race Forum Network, the Civil Service BAME Fast Stream Network, and the Cross-Gov Social Mobility Network.

“The OIT team has done well to try and encourage people from different backgrounds to go through a, perhaps lengthy, application process by showing them what to expect from the role and explaining the more tangible contributions that these Civil Service roles can make to the community,” adds Jolles.

Like Green Park’s Sheratte, Juanchich believes that previous attempts by the Civil Service to use blind recruitment were usually counterproductive. Diversity and fairness were perceived as antagonistic, leading to even more unfair outcomes.

“Now, the idea is to analyse diversity and encourage it by recognising that this has value, that this diversity of socioeconomic backgrounds, ability, ethnicity, gender, age has value,” Juanchich says.

Are these changes in civil service recruitment enough?

Andrea Trainer, partner at Green Park’s public sector search practice, welcomes the changes in recruitment introduced by the OIT. In her experience, greater engagement with underrepresented groups in the pre-application process has a positive effect in encouraging a more diverse candidate pool.

She recommends, however, that information-sharing sessions include individuals from underrepresented groups, or 'Real Models', already working in similar roles who may want to share their lived experience and de-mystify the reality of day-to-day work in the civil service.

Trainer also advises to make the application scoring process part of a “forensic review” of the essential criteria specified in the job description. A persistent barrier in Civil Service workforce diversification, particularly at senior levels, is that the person specification is frequently or unnecessarily prescriptive. Making previous experience in the Civil Service or government, such as having worked with ministers, will likely reduce the candidates' diversity pipeline.

“Others will strongly favour candidates who have previous experience in and around their particular area of policy and delivery – in many cases this will be an essential criterion, therefore drastically reducing their ability to attract diverse candidates in any sense of the word,” adds Trainer.