Pamela Dow, Executive Director of Government Skills Campus at the Cabinet Office, spoke to Government Transformation about the curriculum offered by the new Government Campus and why it is relevant for everyone working in the Civil Service.

Last June Michael Gove, in his former role as Chancellor of the Duchy of Lancaster, set out a plan for reforming the Civil Service. The document highlighted key areas to strengthen in the wake of the pandemic - with a particular emphasis on equipping civil servants with the necessary skills to thrive in a world that has seen an acceleration of digitalisation.

Barber recommended that when you enter a new field in government, you should first review former attempts to deal with policy.

“[Barber said] you should spend quite a significant amount of time reading the history of the activity on that policy programme because it is rarely the case, especially in government, that someone hasn’t attempted to solve a problem before,” says Dow. “Before you come up with your own approach, you should look at what’s happened before and what can be learnt.”

Improving the administrative and delivery capacity of the Civil Service has been a constant focus for reform efforts since its creation in the mid-19th century.

So when Dow joined the Cabinet Office in 2019 she spent a long time studying official reports into skills, and looked at the last 30 years of leadership development, including the different programmes offered at the National School of Government. This was the former college for civil servants established in 1970 and based in Sunningdale Park, in Berkshire, until it closed in 2012 as part of austerity measures.

After reviewing previous approaches to upskilling the Civil Service, Dow found that no one had tried to frame a unified curriculum for the whole 460,000-strong workforce. It was always going to be a challenge to come up with a “sensible curriculum” that could define skill requirements across the diverse jobs existing in such a big workforce.

“But just because it's very, very hard, doesn't mean that we shouldn't have a go,” Dow notes.

The main challenge when designing the new curriculum was to be as inclusive as possible so it would be relevant for any civil servant, regardless of their role: “A set of things that you will need to know and do and is meaningful enough to you regardless of where you are in this complex workforce.”

The new curriculum used in the Government Campus has been planned to address previous skills gaps and to include the competences needed across all of the Civil Service. It has a five strands framework designed to make it easy for civil servants to choose the training most relevant for them and their role function.

The five strands range from core administrative and managerial skills to more niche and specialist knowledge: 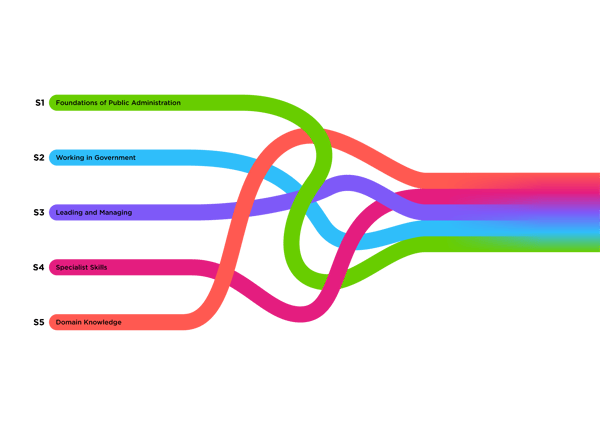 Using a pyramid simile, Dow explains that each strand builds on the previous and that anyone across the Civil Service can benefit from the universal set of skills at the base.

“We need to raise the floor and raise the ceiling,” Dow continues. “By that I mean a more clear, precise set of standards at the universal level, so not forgetting the core skills of basic administrative excellence, which will always be needed. It might sound prosaic but they're vital for getting the job done. Running and chairing a good meeting, giving great customer service, communicating effectively - the basics will always be necessary.

"And at the other end, things that used to be niche knowledge pre-Brexit, pre-pandemic, pre-digital technology, pre-devolution - are now universally required, at least at a foundation level. Things that only a small number of people needed to know, now everyone needs to know them."

The second strand builds on the previous by adding the government angle, including training on the devolution settlement or public finances. Although the third strand (leading and managing) is not exclusive to the public sector, Dow says that is particularly important to compensate for the traditionally greater focus the Civil Service has given to leadership qualities.

“There's a very strong message being sent, a sort of cultural shift we need to make, which is parity of status between leadership and management,” Dow says, adding that to run government effectively, being able to manage people, projects and budgets is essential and not the same as being able to lead.

“We are coming out of a period where there has been a lot of focus on leadership and the qualities of leadership we need, but slightly less focus on the truly essential, precise, skills of management, which may be less glamorous and a slightly side-lined discipline.”

Strands four and five take up a place at the top of the skills ‘pyramid’ and focus on more niche skills and specific areas of government required to work effectively in UK public policy. Although the specialist skills of the fourth strand are designed around the professions and functions of government and as such relevant to every department, Dow says, but are “sort of procedural skills”.

Specialist skills and domain knowledge are strands emphasising science, technology, digital and data, which are needed to navigate the policy challenges of a “global Britain”.

To be able to rise to the echelons of the Senior Civil Service, Dow says that any civil servant needs some basic understanding of data analysis, predictive analysis, prescriptive analysis and diagnostic analysis.

"I was very conscious during the pandemic that understanding of the physical sciences and competence in data was essential to give good advice to ministers, and to be a good receiver and interpreter of advice from scientists. I don’t think that’s going to change.”

Dow concludes saying that the new Curriculum and Campus for Government Skills is not reinventing Sunningdale. In fact, she says that a “quasi-academic faculty” based in a stately house would not attract the right people needed in the Civil Service for a ‘levelled up’ Britain.

"We want to have the best training and development offer, so every civil servant, wherever they are, whatever they do, will get the skills and knowledge required to match their commitment to delivering public service," Dow says.

“Those of us who went to courses at Sunningdale really enjoyed them but if I'm being very critical, we made it too easy to argue the irrelevance of Sunningdale after 2010, because it had become too separate from the knowledge, skills and networks that were needed in the day-to-day work of civil servants."

"The idea of a Campus using all the different government sites that already exist across the UK (the Emergency Planning College at York, the College of Policing in Darlington, etc.) maintains relevance. It sends a more powerful, unifying, message about what the Civil Service is.”