The Chief of Defence Staff has visited DMS Whittington, in Staffordshire, to officially open the new head office of the Defence Infrastructure Organisation (DIO), which will now be co-located with its Armed Forces customers.

DIO is the estate expert for defence, supporting the armed forces to enable military capability by planning, building, maintaining, and servicing infrastructure.

St George’s House, the new DIO HQ, has been purpose-built to accommodate more than 550 Ministry of Defence (MOD) staff who have relocated to the site following the closure of DIO’s former home in Sutton Coldfield.

The Sutton Coldfield site was closed under the Defence Estate Optimisation Portfolio, which aims to modernise the defence estate over the next 25 years and will invest £4.3 billion in new facilities over the next decade. 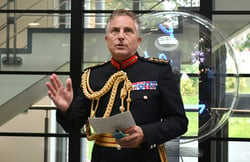 "DIO’s new head office is a great example of smarter ways of working and of effective teamwork," said General Sir Nick Carter, Chief of the Defence Staff. "I look forward to it becoming a recognised exemplar of a modern and inclusive working environment and a home to infrastructure specialists."

All of the building’s energy requirements come from renewable energy sources, with half provided by rooftop solar panels. Overall, these and other measures are predicted to reduce building running costs by £18 million over the next 25 years.

The building was designed around an oak to avoid needing to fell the tree, which was planted by the Cheshire Regiment as a sapling in about 1969. The sapling is believed to originate from a tree grown from an oak sprig given to the 22nd Regiment of Foot. They were predecessors to the Cheshire Regiment and were given the oak sprig by King George II in gratitude for saving him from capture at the Battle of Dettingham in 1743.

The construction contract was awarded to Kier, with work commencing in January 2020 and completing in August 2021. The £12 million project covered the demolition of an existing building, construction of the new head office as well as a new secure car park with 230 additional spaces.