Andy Burnham, Mayor of Greater Manchester, has announced ambitions to support all under-25s, over-75s and disabled people in Greater Manchester to get online. It is estimated that 176,000 residents have not accessed the internet in the last three months, prompting the establishment of a 'Digital Inclusion Action Network' to address digital exclusion. 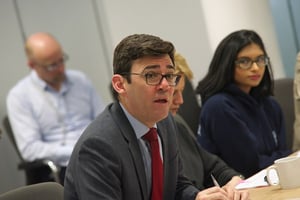 “The pandemic has highlighted invisible inequalities and increasing social divides. We have all seen more of our lives move online and this risks excluding those who do not have digital connectivity. Closing the digital divide now needs to become a much higher priority, said Burnham. “This is why I am setting a new ambition to help all under-25s, over-75s and disabled people in Greater Manchester to get online. We want to create a new drive involving partners from public, private and community sectors to provide the kit, connectivity and skills that people need.”

The new action network will work closely with the Greater Manchester Digital Inclusion Taskforce and enable the Mayor to work in collaboration with businesses, local authorities, voluntary and charitable organisations to drive forward this ambition. It will take on a delivery focused role with a specific focus on supporting under-25s, over-75s and disabled people

The announcement comes after recent figures from ONS show that 176,000 Greater Manchester residents have not accessed the internet at all in the last three months. Greater Manchester Combined Authority (GMCA) has estimated that this includes 1300 under 25s, 93,000 over 75s and 77,000 disabled people.

More broadly, Ofcom figures suggest as many as 1.2m Greater Manchester residents might be digitally excluded in some way, for example by feeling unable to use online banking or engage with public services online. For some people this is about access to kit and connectivity, but for others it is about skills or confidence.

Greater Manchester is the fastest-growing digital and tech hub in Europe and is increasingly seen as the UK’s leading digital city-region. Setting a new ambition of helping all under-25s online sends an important message to potential investors about our commitment to improving digital skills.

Last year, Greater Manchester Combined Authority launched the Digital Inclusion Agenda for Change with the goal of becoming a 100% digitally enabled city-region. To deliver this ambition the Digital Inclusion Taskforce was launched, bringing together both public and private sector organisations to address the barriers of digital exclusion and the digital divide, in a co-ordinated and focussed way.

Fixing the digital divide is a key focus of the Greater Manchester Digital Blueprint, a three-year plan which sets our Greater Manchester’s commitment to being named a world leading digital city-region that puts residents at the heart of its plans.

The Greater Manchester Technology Fund was launched by Andy Burnham in April 2020, in response to the first lockdown, to support young learners facing digital isolation with the technology and connectivity needed to continue their learning at home.

To date, the fund has supported over 1300 disadvantaged young people with a ‘digital kit bundle’ including a laptop or tablet and the required tools to get online.