Moving testimony from Holocaust survivor Steven Frank caps Civil Service event that included contributions from the Prime Minister, the Chancellor of the Duchy of Lancaster, and the Cabinet Secretary, alongside the Chief Executive of the Holocaust Education Trust.

Simon Case, Cabinet Secretary and Head of the Civil Service, said at the end of the hour-long event:

“The Holocaust did not begin with the Nazi soldiers in the concentration camps - it began with hundreds of seemingly small bureaucratic decisions in government. So cherishing the message of Holocaust survivors like Steven is about our responsibility every day to embrace difference with empathy for others to keep this country an open, free and tolerant nation.”“It’s imperative that the Government commemorates Holocaust Memorial Day no matter what the circumstances - and in even these difficult times, we have found a way to come together and commemorate.”

Event organisers said they were “amazed by the fantastic response”, with the event exceeding expectations in terms of participation, and reaching capacity an hour before it started. 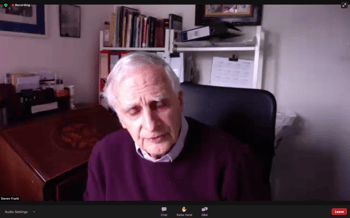 Steven Frank’s harrowing survivor testimony detailed his experience in a succession of internment camps, and ultimately Theresienstadt transit camp, the final staging point before Jews were sent to be murdered in Auschwitz, where he lost his Father.

During his account he held up the Star of David badge that he had to wear sewn into his clothes, and spoke of the courage of his English Mother working hard to keep him and his two brothers alive in disease-ridden camps with inadequate rations, surrounded by casual cruelty, and arbitrary executions. She succeeded.

Last year the Duchess of Cambridge photographed Steven as part of a project commemorating the 75th anniversary of the liberation of Auschwitz.