A significant regeneration project that will deliver new leisure facilities, create jobs, boost tourism, and help level up Blackpool has been announced by Michael Gove today in his first major intervention since being reappointed as Secretary of State for Levelling Up.

The ambitious Blackpool Central project had stalled because there was no funding to move the Magistrates and County Courts currently situated within the proposed site, and this risked scuppering the entire £300 million private sector-led regeneration scheme.

But the Department for Levelling Up, Housing and Communities has today committed £40 million to relocate the courts to a new state-of-the-art complex in the Blackpool town centre, with the specific location to be announced in due course.

This will enable the Blackpool Central regeneration scheme to go ahead as planned, creating an estimated 1,000 jobs. It will also attract 600,000 more visitors to the seaside town each year in a massive boost to the local economy.

This is the latest intervention by Government, which has been working with partners, including the local authority, to help turn the tide on deprivation in Blackpool and provide greater opportunities for people who live in the town. Previous work includes cracking down on rogue landlords, finding new opportunities for regeneration, and delivering new homes and jobs for the community. 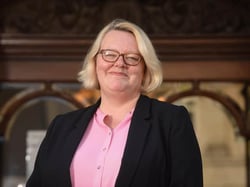 "This is a real example of joined-up Government at its very best with the objectives of the Government, Ministry of Justice, Department for Levelling Up, Blackpool Council and the developer Nikal all being met as a result of this welcome action by the Secretary of State," said Cllr Lynn Williams, Leader of Blackpool Council.

"The funding will enable this huge development in the heart of Blackpool to bring jobs, investment and visitors to our town," she continued. "When finished, the scheme will be an amazing future-proofed attraction for all to enjoy for many years to come."

Blackpool Central will be the largest single investment in Blackpool for over a century. It will see the area transformed into a year-round leisure destination, home to new entertainment centres, hotels, restaurants and a new public square and Heritage Quarter.