Public sector organisations aspire to using the huge of amount of data they collect to make better decisions. But what are the steps to reaching that promised land of Data-Driven Government? We spoke with government data leaders from around the world to see what they are prioritising. 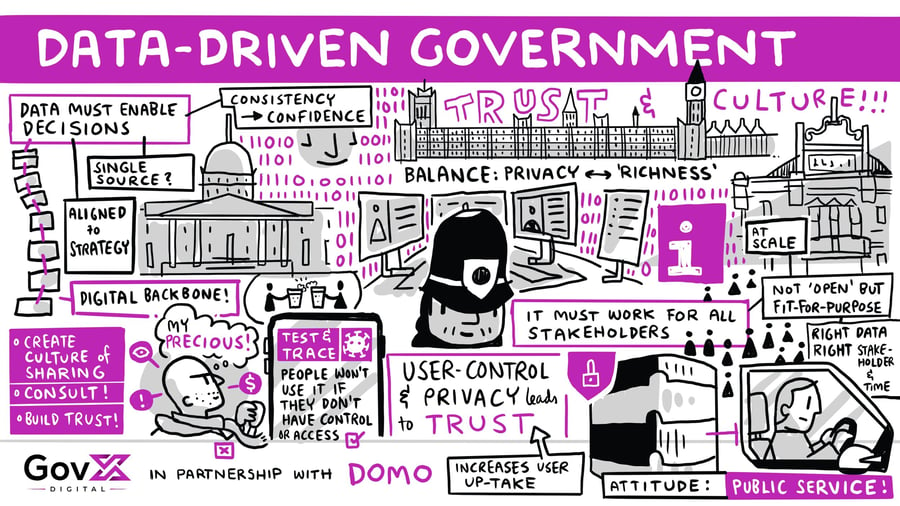 In our organisation, digital evidence-sharing capability is the first big venture into true cloud data. Establishing that platform, securely and safely, and building on that strategic vision is going to be absolutely critical. Once we have that platform for data information, the opportunities become even greater - an ability to use information and share it across organisations appropriately. That's one of our big drivers - it's not about significantly different ways of working with data, it's actually getting data to the right people, the right stakeholders and the right organisations that makes a big difference.

The possibilities just increase through modern, digital applications with data right at the core, which means establishing the cloud platform to continue on that data journey, with a real focus on services and citizens. It's not just about civil servants making up interesting things to do, it's actually building on ministerial priorities to make victims’ and witnesses’ experiences better.

I deliberately conflate AI and machine learning with automation. Automation is one of my big prizes - I do want to use AI, I do want to use machine learning, but it's based on data. I have identified that as one of the key areas in my organisation where automation and enhanced decision-making support can make the biggest differences, not only in efficiency and cost, but also in the speed that cases are assessed and decisions taken.

We have had a public service ICT strategy in place for some time. It has five key pillars, but central to that is data, because all our ambitions are dependent upon joined-up, high-quality data. If you don't know who your customers are, it's very hard to provide a high-quality digital government service to them.

We've developed a pan-government approach to a traditional silo problem. In other words, when government departments and agencies were set up, specifically to carry out a function or service, and they collected the data to enable them to do that, of course, over time, what that meant is that people stored their own data, on their own databases, on their own servers and in their own computer rooms. It may or may not be up to date, and they may or may not have the right addresses of their customers.

So what we did was make two interventions. One was the Data Sharing and Governance Act, which gives our minister the responsibility and the authority over all data belonging to the public service.

The second was the data strategy that sets out a roadmap for us to move from the current position of people owning their own datasets and being very siloed to the idea of Registers of Information, which will have owners responsible for maintaining the quality of that register, with everyone else as users of it. For example, we'll have a register of common individual data like name, address and telephone number, then registers of vehicles, a register of businesses and so on..

We see it as the best of both worlds, even though some people are concerned that it's putting all our eggs in one basket. But actually, we're not doing that because it's very much privacy driven. If you live in Ireland, we hold your name, address and date of birth once, but things like your driving record or your health record will be separately held. So the register is almost the spine that the other bits connect to, which means you have full assurance that if someone needs to see your tax record for example, that doesn't mean they can see your health record.

A key priority for a Chief Data Officer is listening and learning what the culture is in an organisation to get a better understanding of organisational needs and identify the gaps that need to be filled, before starting on the larger governance journey.

We’ve developed initiatives around governance, discovery, trust and talent, all of which play a key role in getting our message known across the Commonwealth of Virginia, not just within executive branch agencies, but also across different localities. I ran a variety of different roadshows where I went out and talked not just to the agencies but also localities and academic institutions.

For each one we gave a different presentation to get the message across because they're all going to hear it in a different way - you can't just have one boilerplate presentation. You have to tailor your communications to the specific audience that you're working with, and then translate that feedback back into your internal operations.

For a long time, I was really only a team of one and it wasn’t until recently that I started to bring on some team members that helped facilitate change. One of the most important roles that we brought in is the Communications Manager, because being able to engage with our stakeholders in a meaningful way, and be able to communicate specifically what it is you're trying to accomplish, was something that I really needed help with. It has made a huge difference in working with our different stakeholders and moving that message along further than if it was just me talking about technology and governance and beating the CDO drum.

What Covid also did was allow governments to realise the pool of assets and the capabilities that they did have, then make a rapid turnaround using smart people who want to do good things in rapid time. It’s important that we’ve identified that energy and now we need to manage it.

It was a realisation that there were too many offline files - the CSVs and spreadsheets - that get passed around organisations and are fine in the normal course of business when you're upgrading at the same monthly or quarterly cadence. But suddenly, when we needed to collaborate, when we needed to have data available every 15 minutes or hourly or daily, that wasn't sustainable, because we needed our people doing much more important work. Covid has driven a greater awareness that a digital backbone allows organisations to pivot more rapidly and effectively.