The Government has announced that New Zealand's Privacy Commissioner is the preferred candidate for the next Information Commissioner.

This is part of a major shake-up in the Government's approach to the use of data, now that the UK has regained control of its data regime following its departure from the European Union.

The Government wants to improve the UK’s data protection regime to make it even more ambitious and innovation-friendly while still being underpinned by secure and trustworthy privacy standards. It believes improved data sharing can help deliver more agile, effective and efficient public services and help make the UK a science and technology superpower.

One example is NHSX’s national database of chest X-Rays and images taken from hospital patients is being made available to researchers, clinicians and all those wanting to investigate Covid-19. This is helping professionals better understand the disease and develop technology enabling faster patient assessment and care in Accident & Emergency, ultimately saving time and lives.

In the coming weeks the Government will launch a consultation on changes to break down barriers to innovative and responsible uses of data so it can boost growth, especially for startups and small firms, speed up scientific discoveries and improve public services.

Having left the EU, the Digital Secretary now holds powers to strike data adequacy partnerships with partners around the world - and has also announced today that it is prioritising new 'data adequacy' agreements with the United States, Australia, the Republic of Korea, Singapore, the Dubai International Finance Centre and Colombia. 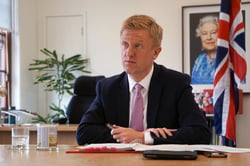 "I’m determined to seize the opportunity by developing a world-leading data policy that will deliver a Brexit dividend for individuals and businesses across the UK," said Digital Secretary Oliver Dowden. "That means reforming our own data laws so that they’re based on common sense, not box-ticking. And it means having the leadership in place at the Information Commissioner’s Office to pursue a new era of data-driven growth and innovation. John Edwards’s vast experience makes him the ideal candidate to ensure data is used responsibly to achieve those goals."

Edwards is currently New Zealand’s Privacy Commissioner and will bring with him a wealth of data regulatory experience, as Privacy Commissioner but also from 20 years of practicing law and specialising in information law. He will now appear before MPs on the Digital, Culture, Media and Sport Select Committee for pre-appointment scrutiny on 9th September.

"It is a great honour and responsibility to be considered for appointment to this key role as a watchdog for the information rights of the people of the United Kingdom," said Edwards. "There is a great opportunity to build on the wonderful work already done and I look forward to the challenge of steering the organisation and the British economy into a position of international leadership in the safe and trusted use of data for the benefit of all."