The Ministry of Defence (MOD) has released its first ever data strategy as part of moves to outline the vision, and define the data outcomes it seeks to achieve by 2025. 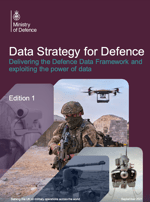 The Data Strategy for Defence sets rules across Defence for data that will make sure that data is treated as a strategic asset, second only to people. Data will be used to help understanding and decision-making, and make Defence more capable and efficient. Data is a key part of Defence’s Digital Backbone – the success of the Digital Foundry and the Defence AI centre depend on it.

Data is described as being the "horizontal enabler" that will optimise operational and business outcomes, informing better, faster decision-making and command and control, nationally and internationally, across all five domains and with the MOD's partners across government, allies and industry.

Caroline joined the Defence Data Office when it was established, part of Defence Digital has been established as well as a Defence Data Framework to transform Defence’s culture, behaviour and data capabilities.

The strategy also gives a structure for data leadership that unites all Defence organisations. Defence will use partnerships and relationships across government, with allies, industry, and academia, to improve the way it works with data. The strategy will also drive Defence to evolve how data is organised, shared and used. This will deliver better decisions and outcomes: giving battlespace advantage and business efficiency.